Today I’d planned to post a GF pancake recipe that is totally rocking our worlds, but life got in the way.

I was traveling this past weekend. In terms of blogging, I thought I was totally prepared since I scheduled my posts ahead of time. What I missed was the complications of traveling home. Two flights over a 4.5 hour time span turned into nearly a 24 hour trip. Needless to say, I got home yesterday exhausted and hungry and now I am just a little bit behind!

I’m sorry about this post’s lack of anything to do with GF food! Keep watching for the pancake recipe which will be coming soon (and probably a post about surviving in an airport as a celiac, too)!

Posted in News and tagged Travel. Bookmark the permalink.

We recently took a somewhat spur-of-the-moment road trip, trying to check off some more states from our list of the ones we haven’t visited yet. Traveling with a restricted diet can be a bit nerve-wracking, with eating out at so many unknown places. On the flip side, visiting a new place gives you the opportunity to eat at GF restaurants you wouldn’t have the opportunity to try in your hometown! This trip had some great finds, and some not so great finds. Here’s my thoughts on the restaurants we ate at:

Fayetteville, WV doesn’t sound that awesome. I mean, have you ever heard of it?! The last time we were in WV we stayed in a cabin in a state park and didn’t have cell phone reception within a half hour of the park. I didn’t have high hopes for good GF awareness where cell phones can’t be used! In fact, we hadn’t even intended to stay in Fayetteville, but on Priceline the hotels there were much cheaper than our original destination. We’re adventurers, so we decided to change our plans and stop in Fayetteville.

After exploring Raven Rock State Park, in NC, we drove to Fayetteville and were checking into our hotel around 9:15pm. I’m famished, at this point. My husband probably is too. He strikes up a conversation with the woman who is checking us in and asks if she’s heard of gluten free and if she knows of any GF friendly restaurants in the area. It turns out she had a celiac nephew, and recommended a place called Pies ‘n Pints as the best GF dining in the area. I’m thinking “Pie. I want dinner, not dessert”, but I quickly realized this is a pizza pie restaurant. Now, in general, I feel that most GF pizza is “blah” at best, but I was tired and hungry, and it was literally 3 minutes away.

So we arrive at Pies ‘n Pints, which is actually a really neat looking place. It has brightly colored walls, and lots of architectural elements. There’s a TV playing sports and another playing a black and white movie. We get seated right away and the waitress quickly comes to the table. When I ask her about the GF options I was pleasantly surprised to find out that nearly all of the pizzas could be made GF, they had GF bread for the sandwiches, even the chicken wings were gluten free! I believe they also have GF beer, but I hate carbonated beverages, so I didn’t take much notice of that.

I ordered a Margherita Pie and Husband settled on the Cuban Pork Pie. After waiting about half an hour after our order was placed I started complaining about the wait time. I was hungry (still), and the restaurant was not that full. Husband mentioned that the menu had a statement saying something along the lines of “It takes a little longer to make our pizzas than traditional pizzas, but we think that the wait is worth it”. We decide to give them the benefit of the doubt. A few minutes later our pizza comes out. Have I mentioned that I was hungry? My pizza is a little rectangle and the toppings are all the way to the edge of the crust. 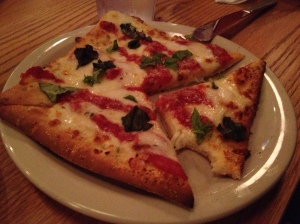 I took my first bite and it was DELICIOUS. Unlike, every other gluten free pizza I have ever had, the crust was soft, spongy, moist, but not overly doughy. If it didn’t clearly look different than Husband’s round pizza, I would have thought I was eating a wheat crust. Beyond the crust, just the simple toppings on my pizza were delicious. The tomato sauce was smooth and the perfect blend of sweet and tangy. The fresh basil on top, was done perfectly, too; not crunchy and dried out. Needless to say, I at the whole thing. Husband ate his entire pizza, too. When I talked to the waitress at the end of the meal she mentioned the crusts come frozen, and they treat all of their doughs with some kind of oil. Whatever they do, they are doing it right. According to their website, Pies n’ Pints has 3 locations in WV and OH. If you are nearby, check them out! Next time, I’m totally trying the wings next time!

Since I knew we would be in Nashville during this read trip I checked out Groupon to see if there was any deal for restaurants with GF options. We found Bombasha, a Brazilian Steakhouse. We’d previously been to Tucanos in VA, another Brazilian Steakhouse and loved it (great food and great labeling of many allergens), so we wanted to try another. Bombasha was very fancy; definitely a “date night” type of restaurant.  The entire staff was wearing black and white, there were fancy table clothes and candles, etc. We got a few items from the salad bar before the meat and sides started to be delivered to our table. It turned out that of the 12 different types of meat, only about half were actually gluten free. I got to try all but one of those safe items, and honestly they were not that good. A few had good flavor (I enjoyed the parmesan crusted and top sirloin), but for the most part the meat was dry. That would have been disappointing for the $20/meal we paid with the groupon, let alone the $40/ meal it would have been without. The sides were fried yucca, fried bananas, and mashed potatoes, which we really enjoyed. The friend yucca unusual, but tasty, almost like french fries. The bananas were very sweet and dessert-like. Overall, I wouldn’t recommend Bombasha for GF dining or dining in general. Definitely try a Brazilian steakhouse sometime, if you have’t yet.

Even though our groupon experience with Bombasha was poor, we decided to use have another try with groupon for breakfast at a place called Pfunky Griddle. We arrived shortly after 8am, which turned out to be great, since the restaurant started to fill up shortly after we arrived. The decor in this place was super fun. The restaurant building is a remolded house. Each room had a different, colorful, mural of an outdoors scene. The windows were even painted. It was bright and colorful. Ironically, we were seated in a room with wheat fields painted on the walls! The music playing throughout the restaurant was all upbeat oldies. It just seemed like a fun place right when you walked in!

Pfunky Griddle does for pancakes what the Melting Pot does for fondue. Each table has a large griddle in the center. You order pancake batter and toppings and prepare your own on the griddle right in front of you. They offer 3 types of pancake batter, one being a GF batter, and even will bring out a dedicated GF griddle. You pay $6 for unlimited batter and 99cents for small cups of toppings. Although the GF pancakes ended up dry, the experience was fun. The griddle was big enough that I had half for my GF batter and Husband used the other half for his normal pancakes and there was a large buffer zone. Experimenting with all the different toppings and not worrying about having to clean up the mess afterwards was a nice treat. The cost was affordable, and the coffee was great, too! I left feeling quite full. If/when we are in Nashville we will definitely stop here again. 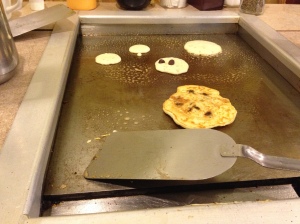 I usually go for trying small, local restaurants when I’m traveling, but in Hickory NC we ended up at Mellow Mushroom. This was not the goal. Our plan was actually to go to an authentic sounding German restaurant which was also listed as “GF friendly” on UrbanSpoon. When we got there, looked at the menu, and the restaurant owner told me that the sausage cooked in beer was GF, I was immediately concerned. Not surprisingly, we left. We ventured through the town (city?) of Hickory looking for a cafe a woman at the hotel had recommended to us, which was quite an adventure. We stopped and asked a cop for directions, but what he gave us the was wrong. On the way there were called another restaurant I had found on UrbanSpoon, asking about their “GF friendly” options, and the man who answered the phone said he didn’t know what that was listed and the restaurant didn’t actually have anything to offer me. At this point we’d been driving for a while and needed to eat. We remembered driving past a Mellow Mushroom, so we navigated back there. There was some live music going on and the restaurant was nearly empty (it was 9pm). We waited 45 minutes for our pizzas. I’ve had Mellow Mushroom pizza before, and, like I said earlier, it fits into the same “blah” category that the vast majority of other GF pizzas fit into. It’s also overpriced, in my opinion. But, at least we got food. We got back tot he hotel late, to find out that bathroom light didn’t work, and the bathroom door also ran into the toilet instead of shutting. And this was supposed to be a 3 star hotel? Not a positive experience in Hickory, NC.

Before starting the drive back home we stopped at a Waffle House across the street from the hotel for breakfast. Waffle House sounds scary for a celiac, but I’ve found it to be quite safe. When I explain what I need the servers are usually happy to oblige. The best part is, You can see them making the food so you know if they mess it up! I order eggs and hashbrowns. So greasy, but so tasty. Waffle House is not my idea of really great food, but every one in a while it’s a good splurge, and it’s relatively inexpensive. They seem to be all over the place down in this area of the country so it’s a good place to keep in mind if you are having trouble finding gluten free in a city.

For other meals on the road trip we did things simply. I carried around instant grits and made them using the hot water from hotel coffee machines. Lunch is usually tuna fish and GF crackers. Plus, there are always lots of snacks in the car on road trips!