Crispy potatoes and bacon topped with baked eggs and a sprinkle of mozzarella cheese. A hearty breakfast, brunch, or breakfast for dinner casserole!

I really wanted to get this post up a week ago, but time was just not working in my favor. Seeing 600+ children a week with coughs and runny noses had me fighting off a cold. I had activities scheduled for every evening, and even had work events on the weekend. I tried to sit down and blog on Wednesday evening and nearly fell asleep at the computer! I really don’t want to give up writing this blog, so I’m going to try to stick with a short and sweet post this week. I’m sorry I missed out on getting this up last week!

Strangely enough, the last recipe I posted was also for a breakfast. You’d think that with getting up at 6am most days, then being at work by 7am, I would not be making many complex breakfasts. Somehow, that seems to be where most of my food creativity has been lately! Once it’s the weekend I just want a breakfast that isn’t as boring as the same old weekday stuff.

This “hash brown”, egg, and bacon skillet is definitely more of a weekend breakfast/brunch item. Maybe even breakfast for dinner type of food. It’s hearty and filling!

This recipe started with me really enjoying using my spiralizer. I use it all the time for dinners, but less often for other meals. Sure, I could just use (and have used) a grater to make hash browns, but spiralized potatoes seem more exciting! I like this breakfast with a combination of white and sweet potatoes to keep the flavor interesting and include more nutrients than usual white potato hash browns. 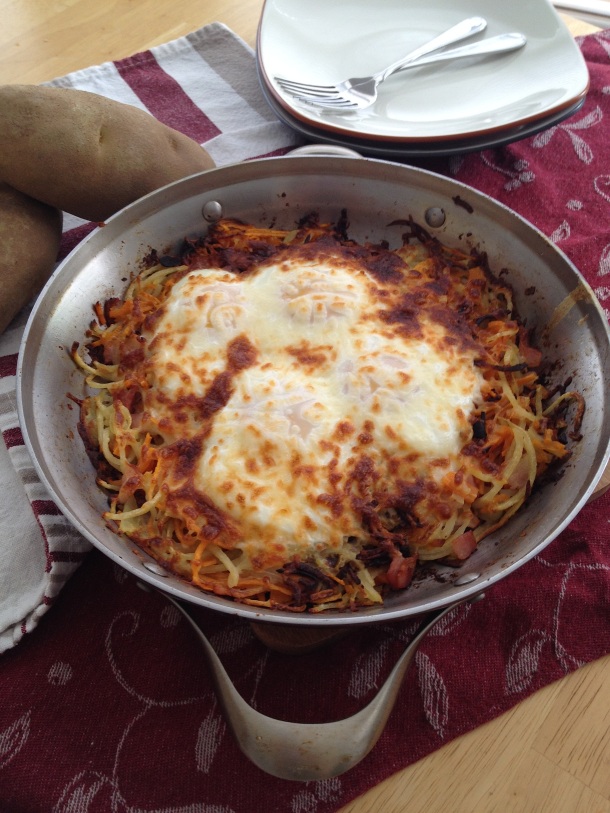 Add some diced bacon, eggs, and a handful of cheese to the cooked potatoes and you have an all-in-one meal. Just pop in the oven on broil for a few minutes to cook the eggs! Believe it or not this breakfast/brunch doesn’t take forever to make. It’s not quite quick enough for a rushed morning, but can easily be cooked from start to finish in under 30 minutes! Totally worth it for special weekend morning!

This serves 2 – 4, but is easily variable. Choose larger potatoes or crack a few extra eggs on top to increase the number of servings.
Ingredients
Directions

Give your leftover Thanksgiving mashed potatoes a new twist with these potato cakes. They taste so good you may just be wishing you had ended up with more leftover mashed potatoes!

Does anyone else out there hate leftovers? I love making and eating good food, but there’s something about eating a reheated version the next day for lunch that I don’t enjoy. Some things are just best fresh and are never as good leftover. For me, part of my hatred of leftovers is eating the same thing two or more days in a row. It seems so boring.

When there are leftovers, and lots of them, I try to jazz them up. It turns out that you can turn almost anything into a quesadilla. Or top a pizza with it.

Today’s leftover recipe is just in time for Thanksgiving leftovers. I’ve noticed that, at least in our family, there are always Thanksgiving leftovers. And not just an extra plate or so, there is like a weeks worth of Thanksgiving food. As much as I love mashed potatoes I have no interest in eating them, with the same turkey and the same stuffing, for a week straight. Especially after the gravy has run out.

Enter these potato cakes. Rather than being flavored by butter and gravy these little potato patties have green onions, cheese, and maybe even some bacon bits added in. Cook ’em up for a few minutes in a frying pan and you have quick snack, side, or even lunch. And don’t forget the ranch dressing for dipping!

I absolutely LOVE mashed potatoes. Not much tastes better to me than some creamy potatoes and warm, smooth gravy. For my health’s sake, though, I usually make mashed cauliflower in the place of mashed potatoes. It seems like a weird substitution, but it really ends up filling in almost perfectly for potatoes! Sometimes, though, especially on holidays, I don’t mind letting myself have real mashed potatoes.

This is the recipe for mashed potatoes my family has been having on Thanksgiving for years. It is far from healthy but so, so delicious. The extra creaminess comes from cream cheese and sour cream. If you, like me, generally refuse to cook with anything that has the word “cream” in it, then don’t worry, I have a healthier option. Just sub in an equal amount of plain Greek yogurt for the cream cheese and/or sour cream. So, there’s really no excuse not to give this recipe a try! 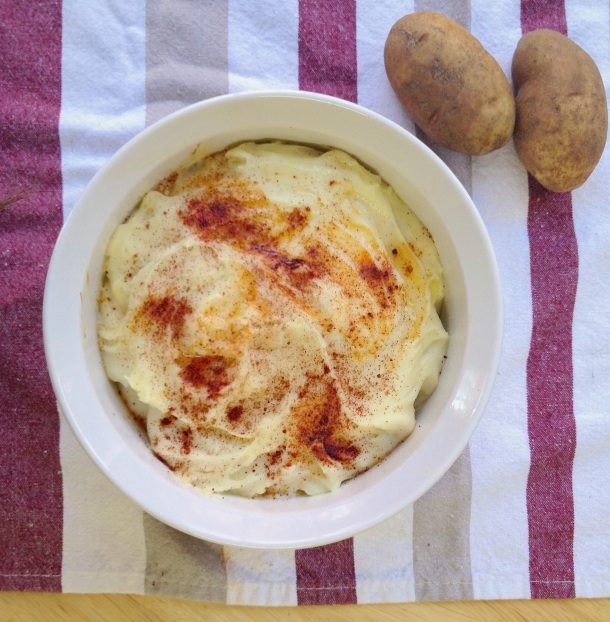 Posted in Recipes and tagged holiday, potatoes, side dish, thanksgiving. Bookmark the permalink.
%d bloggers like this: